Winter solstice marks the shortest day of the year and the official first day of winter. Winter Solstice for the year 2022 is on December 21. This day marks the beginning of the winter season.

It is the most important event of the year – even more significant than the summer solstice because it welcomes in the new sun. For this reason, pagan and druid communities actually celebrate the first sunrise after the winter solstice.

The Winter Solstice is an astronomical phenomenon that marks the shortest day and the longest night of the year. In the Northern Hemisphere, the Winter Solstice occurs on 21 or 22 December, when the sun shines directly over the tropic of Capricorn. At sunrise on the shortest day of the year, for 17 minutes, direct sunlight can enter the Newgrange monument, not through the doorway, but through the specially contrived small opening above the entrance known as the ‘roof box’, to illuminate the Chamber.

The chamber of the Neolithic passage tomb Newgrange in Co Meath, was partially illuminated during this morning’s sunrise for the winter solstice.The astronomical phenomenon marks the shortest day and the longest night of the year.The sky was clear as the sun began to rise over the Boyne Valley, but at 8.58am the sun became obstructed by cloud. 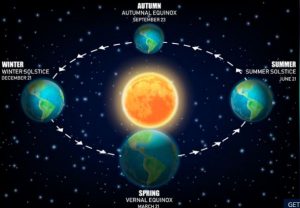 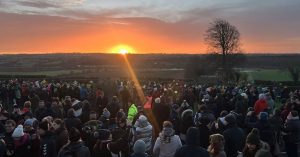