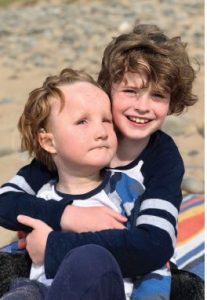 Oscar Charlie Fitzgerald is five years old and was born in June 2016. Our little boy is the happiest little boy in Co Kildare, where we live. He is always smiling and laughing. He loves being hugged and gives the sloppiest of kisses. As soon as he wakes in the morning, we are greeted with the biggest smile. He is crazy about his big brother Sam, and he is so happy when he returns from school.

Although Oscar is visually and hearing impaired, he loves nothing more than playing with his light-up, music-making cause-and-effect toys. Oscar loves music, he hums along and dances to his favourite songs by rocking his head from side-to-side. He loves when we sing to him and enjoys playing his keyboard. Oscar can’t walk yet, but he is learning to take steps in his special needs walker. However, he’s at his happiest being swung around in our arms dancing to loud music.

Oscar has full Trisomy 13, which was a huge surprise to us as his diagnosis was post-natal. Oscar has a number of difficulties, which include epilepsy, breathing apnoeas, swallowing/feeding challenges, renal issues, and relentless stomach reflux. He is also cognitively delayed. It was the difficulty feeding that highlighted issues soon after birth, which one week later resulted in his FT13 diagnosis. And while Oscar’s care was extremely difficult at the beginning, like everything, in time it got a bit easier.

However, Oscar continues to have life-threatening seizure/apnoeas, which frequently require resuscitation. It’s so surreal that one minute we can be resuscitating Oscar, and the next cooking dinner or going on a school run. It is a bizarre situation, but this too has become the norm. It does, however, mean that we have to watch Oscar every minute of the day and night, as there is no way of knowing when his next serious episode will be.

As Oscar’s mammy, it can be difficult seeing other kids his age running around playing, when my little man is so delayed. However, I cannot express how grateful I am that he is still with us. Not one day goes by that I am not grateful for that. I am extremely conscious of all the families who have had to say goodbye to their wonderful little babies far too early. I like to think that they live on through our Oscar, and that he has a big responsibility to represent them and make them proud.