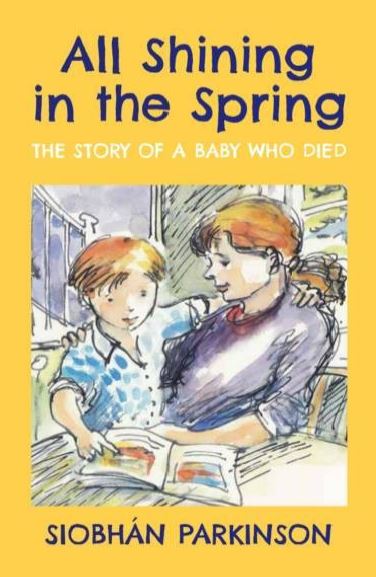 All Shining in the Spring:

The Story of a Baby who Died

A book that SOFT had been asked to highlight

Matthew is excited about the new baby. But then, one day, something very sad happens. The doctor tells Matthew’s mother that her baby isn’t growing properly and it won’t be strong enough to live outside her body.

Matthew and his mother and father will always remember their baby. But as time goes by, they will not

feel sad so often. This child-centred book is intended to help children and families who experience miscarriage, stillbirth,

A new edition of the first published book by Siobhán Parkinson, who later became Ireland’s first Laureate na nÓg (Children’s Laureate). It was writing this book that

Parkinson found her voice as a children’s writer, a gift she credits to the baby she lost all those years ago.

Will help families who experience the loss of a baby

Addresses an under-discussed issue in a child-friendly way

Siobhán Parkinson was Ireland’s first ever Laureate na nÓg (Children’s Laureate). She has published more than 30 books for children and adults, in

About the ilustrator Donald Teskey is one of Ireland’s foremost artists and illustrators. He is a member of the Royal Hibernian Academy. He has published books incollaboration with authors including John Banvilleand Derek Mahon.