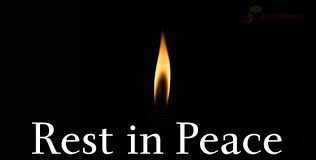 We are all shocked and saddened at the sudden death of Kay Fagan RIP. Kay was a long time member of SOFT and mother of Elaine (A Ray of Light) who lived until she was 24 years old

We extend our sincere sympathies to Michael, Nicola, David, Brian and extended family.

Funeral arriving in Castleconnell Church for 12 noon mass on Wednesday the 10th with burial immediately afterwards to Stradbally Cemetery.

May her gentle soul rest in peace